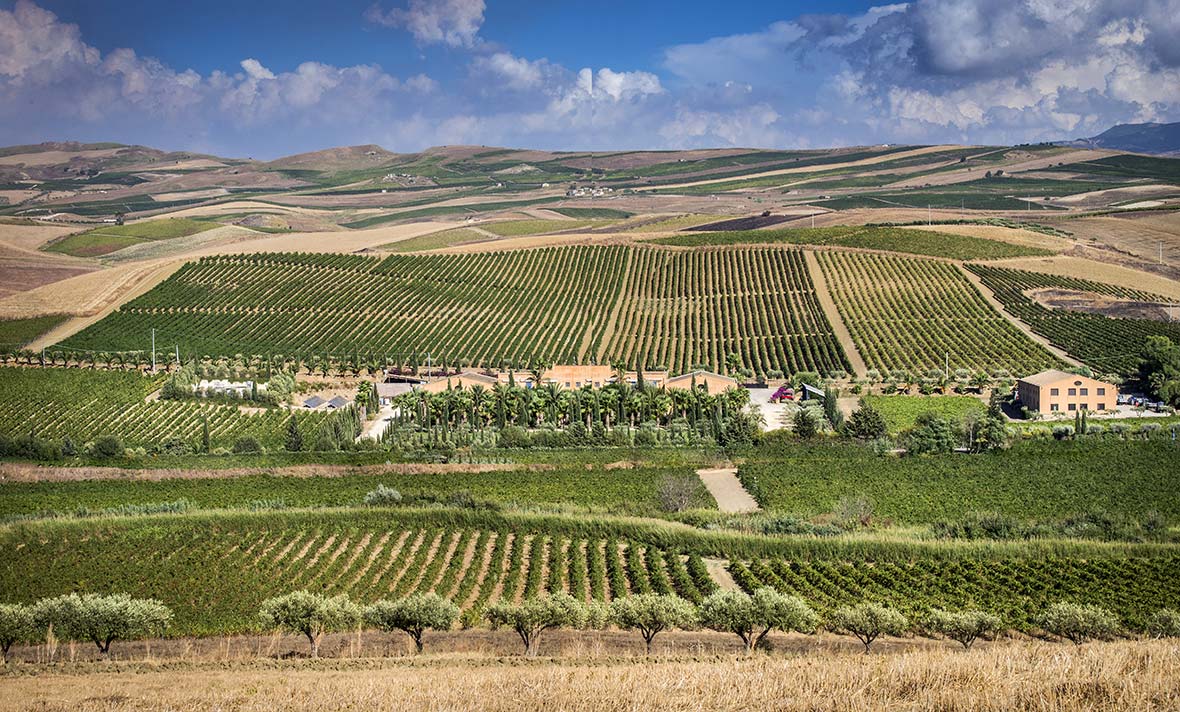 Woman on the Run

Fine Wines from One of Sicily's Leading Wineries

Last spring I traveled to Sicily with a group of writers to visit wineries and attend the annual meeting of Assovini Sicilia, the association of Sicilian wine producers.

One of the wineries we visited was Donnafugata, headquartered in Marsala, on the western tip of the island.  The city is known for its history (Garibaldi and his red-shirted rebels landed there in 1860) and for Marsala wine, a fortified beverage like Port and Sherry. 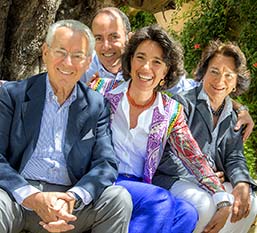 Giacomo Rallo and his wife, Gabriella Anca, founded Donnafugata (donnafugata.it) in 1983.  Their families had been in the wine business for five generations, primarily making Marsala.  But enthusiasm for Marsala wine was waning, and Giacomo thought it was time to make a change.  On a visit to California, he observed how winemakers there used modern technology to make quality wines in a hot, dry climate similar to that of Sicily.  The die was cast.

Sicilian wines that would appeal to contemporary tastes.  They chose an intriguing name for their new enterprise—Donnafugata, which means “woman in flight.”

The name refers to an actual woman in flight, Queen Maria Carolina of Naples, who fled Naples for Sicily in 1798 to avoid being captured by French troops.  (The French had been unkind to her sister, the late Marie Antoinette.) 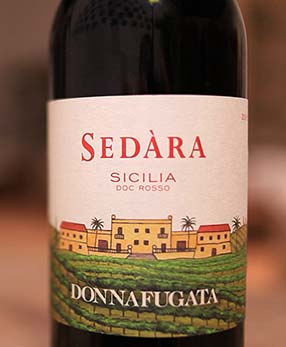 Maria Carolina found refuge in a palace in the town of Santa Margherita di Bèlice, southwest of Palermo.  As it happens, the Sicilian nobleman and writer Giuseppe Tomasi di Lampedusa (1896–1957) stayed in that very palace during his childhood.  He set part of his masterpiece The Leopard there, calling the surrounding region Donnafugata.  The Rallo family owns vineyards not far from the novelist’s childhood haunts.  They have named several of their wines for characters in Lampedusa’s great novel.  (In 1963, Luchino Visconti turned The Leopard into a movie starring Burt Lancaster, Claudia Cardinale, and Alain Delon.)

Here are notes on three Donnafugata beverages—a flight of wines from Sicily’s “woman in flight” winery. 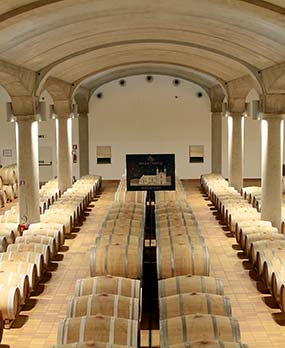 Siciliane IGT 2012 ($40) is named for one of the characters in The Leopard, a dashing young gentleman.  The wine is a blend of Cabernet Sauvignon, Nero d’Avola and Tannat, a rather unfamiliar grape grown mostly in southwest France and Uruguay.  It was aged 14 months in barriques of new and old oak.  Like Tancredi,  Donnafugata’s wine is dark and deep.  A rich Burgundy color, barely translucent around the edges, it exudes an intense bouquet in which one can identify fragrances of blackberries, blueberries and raspberries.  The flavor is complex—fruity, to be sure, with elements of blackberry, dark cherry and strawberry punctuated with pepper, 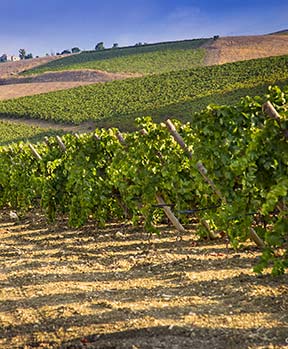 black olives, dark chocolate and tobacco.  This is a rich, lush wine with a solid core to it, as handsome and captivating as Tancredi himself.

The imposing building on the label of Donnafugata Mille e una Notte Terre Siciliane IGT 2010 ($80) is the palace where Queen Maria Carolina took refuge.  Gabriella Anca Rallo captured the image and embedded it into the sky from Arabian Nights, “full of stars and full of promise.”

This Arabian Nights wine is a deep purple color, and has an intense bouquet of blackberries and plums in which one can sense fleeting aromas of charred oak and wet stones.  Soft, rich and juicy in the mouth, it offers up 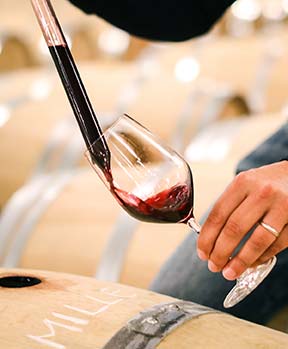 flavors of raspberries and blackberries with subtle tannin—a hint of tea—and herbs.  Red apples echo in the long finish.  Mille e una Notte is a blend of Nero d’Avola, Petit Verdot, Syrah and other grapes, a blend as intricate and engaging as Scheherazade’s tales.

Sedàra refers to another character from The Leopard—not to Don Calogero Sedàra, the crass, corrupt mayor of Donnafugata, but to Angelica, his lovely daughter, who wins young Tancredi’s heart.

Sedàra Sicilia DOC 2014 ($16) is rich Burgundy in color.  Its fruity bouquet reminds one of plums and blackberries, also to be noted in its flavor.  This is a fresh, spicy wine with light tannin and acidity that make it 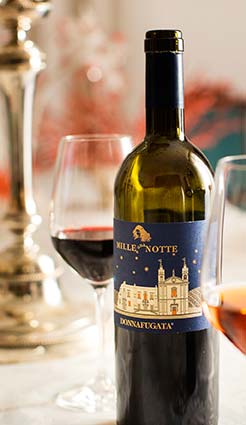 good to pair with food.  One might say that the flavor of this wine is overt—openly and immediately attractive.  Could this be a subtle reference to the character of Angelica, Tancredi’s beauteous inamorata?  Sedàra comprises Nero d’Avola along with Cabernet Sauvignon, Merlot, Syrah and other grapes.  It is not aged in oak.

Donnafugata remains a family enterprise.  The Rallo’s two children—José and Antonio—joined the business early on and continue to manage the firm today.  Giacomo Rallo passed on last May.

The Rallos were wine revolutionaries, members of a movement that has transformed winemaking in Sicily.  The first phase of the revolution was to grow international grape varieties like Chardonnay and Cabernet Sauvignon, which do very well in the Sicilian soil and climate.  Nowadays, winemakers are embracing traditional Sicilian grapes like Grillo, Nero d’Avola and Frappato.  Try them.  You will be amazed and delighted. • 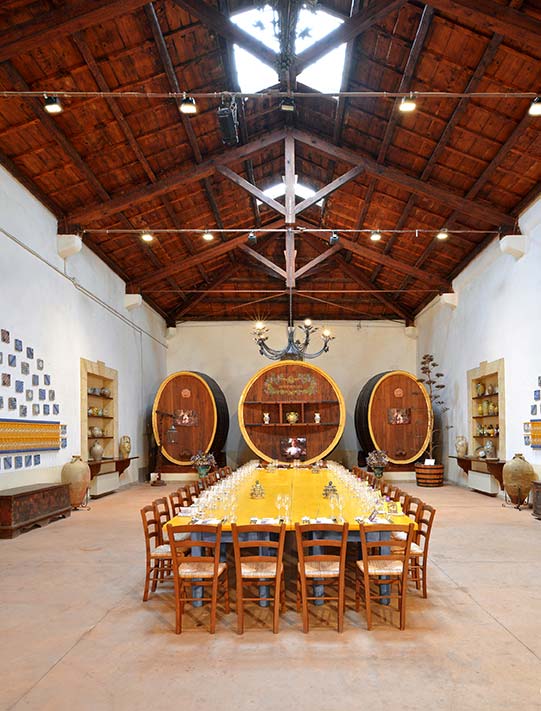 Robert B. Calvert drinks and writes in

Robert: This email address is being protected from spambots. You need JavaScript enabled to view it..

In order to perform this action you have to login

Thank you to our Trusted Partners for helping support local entertainment, tourism and economic development. 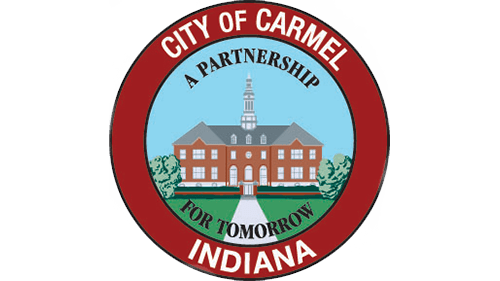 From road crews to restaurants, banks to breweries, Carmel local entertainment and tourism impacts nearly every local business each year. That ripple effect lasts longer than the average family visit to Carmel. Many of today’s visitors become tomorrow’s residents, neighbors and coworkers, creating even more economic and cultural growth.

We ask you to join ExploreCarmelIN.com as a Trusted Partner and be part of a select community of leading local businesses – of all industries and sizes – that work together to build a stronger future for Carmel, Indiana.

Explore City Sites, LLC is dedicated to sharing with locals and visitors the highest quality content in Carmel, Indiana. Our goal is to provide viewers the best of the best so that you can find the information you need when you need it.

Email: This email address is being protected from spambots. You need JavaScript enabled to view it.

Email: This email address is being protected from spambots. You need JavaScript enabled to view it.